Today we finally heard the words we have been waiting for since Jan 2009. "Delaney shows no signs of ever having Scoliosis" Magic words:) Such a thrill! We hit the end of the road. I say that with a bit of caution, as we will still have to go for x-rays once a year to be sure we are holding steady. And when Delaney hits the age of about 12 they watch much more closely until she is done growing. During the teen years and all the growing children do, sometimes Scoliosis returns. But right now, we celebrate!! No more BRACE! No more anesthesia! No more worry about her ever being fully cured...because SHE IS!!! What a blessing!

I think back to that one horrible day. The one where the doctor said "There is no cure" and proceeded to tell us the horrors that Delaney's life would bring. I think about laying in bed that night feeling helpless that I couldn't help my little girl. That we had a long road ahead of us. Worse that her life would be full of pain & suffering and would probably end sooner than any parent should ever have to think about.

And then there was hope.

A doctor on the other side of world had created a procedure to cure Infantile Scoliosis. A simple procedure, in fact. Non invasive. And an amazing Mom who's daughter needed this procedure fought to bring awareness here to America. Shriner's Hospitals for Children are the leaders in treating Infantile Scoliosis with the CAST procedure. Because of them that dark day turned into cautious hope. As she healed, each doctors appointment brightened that Hope.

To me this Mother, Dr. Min H. Mehta, & Shriner's Hospitals are hero's. I say a special prayer for them everyday for saving Delaney's life and the lives of countless other children. We owe so much to them! And a very special Thank You to all our wonderful family & friends who offered support, meals, phone calls, compassion and most of all prayers! Delaney is proof that prayer works! Today we Celebrate!
Posted by Melody No comments: 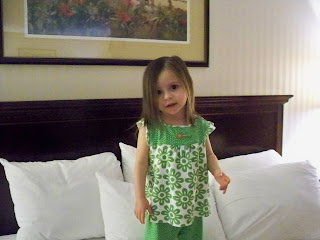 That's what the doctor said yesterday after Delaney's procedure....Delaney is one of our miracle stories. As a parent, those words meant the world to me! When we started this process, the diagnosis was grim. We pictured our precious daughter in a brace until she was a teenager and able to handle spinal surgery which may not even have corrected her. She could have had major deformities and health problems from her scoliosis for the rest of her life. A short 15 months later she is cured! She is healthy & happy and will not have all the problems we envisioned. We owe it all to Shriner's Hospital for Children & the wonderful website that gave us hope, infantilescoliosis.org.
I will say, it's almost a love/hate relationship with Shriners. NO ONE wants to see their child go through what Delaney went through yesterday. When she looked at me with her tear filled brown eyes screaming Mommy, I wanted to snatch her up and take her home...my heart said protect her, my head said this is for her to be healthy.  My head won and my heart broke. Guess that's all part of being a parent.


Starting at the beginning of our LONG 24hours...we checked into our hotel in Erie & ordered room service. Delaney had slept the whole 2 hour car ride there, so she stayed up until 10. She had so much fun. That girl can find adventure anywhere she goes...she thought the hotel room was great. She ran around laughing & playing like she has never been out of the house before. She has so much personality, she constantly has me laughing. She did fall & hit her forehead on the bed, which gave her a big lovely bruise. She cried for about a minute & was up having fun again. Always the trooper... 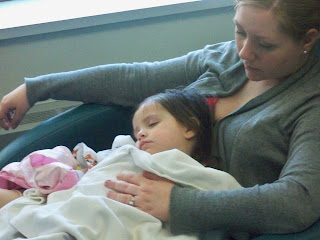 So 6am started our 12 hours of torture. We got settled into her room and of course the nurses came & took all her vitals and ask us the hundred questions they have to ask before each "surgery". Then we headed to pre op to talk to the doctor & anesthesiologist. Today they were doing a mold of her body to give to the prosthetics dept to make her brace. They took her to the OR at about 9:45 and by 10:30 we were in post op with her. After being put under she is always so out of it for a while, very disoriented and crying. She was still hooked up to the IV and all the monitors but they do let us hold her. We were in post op for about a half hour until all her vitals are stable and she was doing well. Then we were taken to her room where the nurse came in and took all her vitals (which of course she cried through). They won't take the IV out until she has had some juice but she was to tired to drink and fell asleep in my arms. So we just sat there while she slept for about an hour. When she finally woke up she drank lots, so they took out the IV and we were allowed to leave to get lunch. By this point we couldn't get Delaney out of there fast enough...she had had enough of all the poking & prodding. She cried until we got in the car. We were supposed to go to prosthetics at 3 to be fitted. I think this was the worst part of the day. As soon as the put the brace on her she threw up everywhere, and apparently the guy couldn't handle it so he LEFT. He just left the room and didn't come back. So poor Delaney is in this brace that hasn't been fitted properly yet so it's very tight, she just threw up and she is screaming. That was the point that I just wanted to leave, just rip that brace off and never come back. It took about 10 minutes for someone else to come back and mark where the brace needed adjusting. So we finally got the brace to fit right after about 4 adjustments and lots of tears (Delaneys & mine). Then back to Shriners to xray her in her brace to make sure it would hold her spine straight. We headed home at about 5:15...whew long day! Poor Delaney didn't even seem like the same kid, she looked beat up, red eyes, exhausted, bruises on her arms from IV (plus the lovely bruise on her forehead), she breaks out from the tape they use so her face and arms had red rashes. And she just sat there staring with her head hanging. Definitely NOT my fun loving Delaney. It was a pathetic sight.
Didn't realize this would get so long, so I will get to the good news. We are going back on Aug 5th to make sure she is still good, just xrays this time...and if she is still holding straight they will start weaning her off the brace!!! That is the miracle part!! We thought she would be in the brace AT LEAST until she was 5 years old...but she has done so well, corrected so quickly & had no set backs that she can wean off now at 2 years old!! We have been so lucky because so many kids don't even get diagnosed until 2 or later..and here she is, just turned 2 and weaning out of hers!!

God bless infantilescoliosis.org, Shriner's Hospitals for Children, Dr. Patrick Cahill and all the wonderful staff at Shriners. You gave our daughter her life and I could never repay you for that! You are angels sent right from GOD!!!!!
Posted by Melody No comments:

Great news and a new friend!

On February 19th we had Delaney's checkup at Shriners. I have to confess I was nervous. Delaney's brace, which she got last June was so tight. She was miserable all the time and could hardly eat when she had it on. So, probably since Christmas we have been letting her go without it a lot more than we should. Since it didn't fit the same I was also afraid having it on and pressing her back in the wrong place would do more harm than good...so needless to say we were pretty lax with it. So this appointment was especially important because I was afraid of her regressing.

Wonderfully, not only did she not regress but she IMPROVED!!! Which is amazing since she was out of it so much. She actually went from about 9 degrees to 3 degrees! What a little miracle she is. You could tell by Dr. Cahill's face that he was very pleased. So pleased, in fact that Delaney only has to wear the brace at night from now on:) To put this into perspective, initially, she was supposed to be in a CAST for 2 years then a brace 23 hrs a day until she was a teenager. Instead, our girl wore a cast for 4 months and the brace 23 hrs a day for about 9 months. She is at the place with this that we thought she would get to as a teenager! AMAZING! We have been so blessed.

They did do some brace adjustments to make it fit better, so that we could get more use out of it. She is scheduled to have a new mold and brace (which she has to be put under to do) made at the end of May. I always hate those trips, they are so long and grueling...but so worth it!

Just a side note, Delaney has a small blankie with a bunny head that has been "her" blankie for ever. She sleeps with it and it is very loved. Well while getting her xray..she was very upset, so they gave her this cute little Panda Bear. It has now joined ranks with blankie. She hasn't let it out of her site since she got it:) So we now have 2 "lovies" Bear, she calls him, was her comfort at Shriners and is now part of our family:) 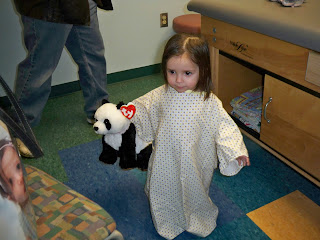 Here is a picture of her at Shriners with "bear" and in the smallest gown they had. She looked so cute:) 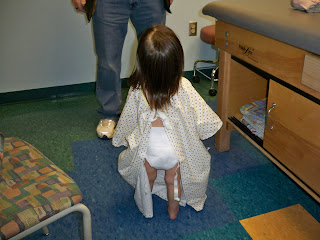 Posted by Melody No comments:

Shriners Hospitals for Children is a one-of-a-kind health care system providing pediatric specialty care to thousands of kids each year...at no charge...thanks to the generosity of donors, past and present. There are many ways to give from direct gifts to planned gifts and all gifts, big or small, make a difference. 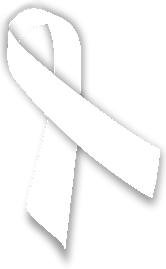